In Grief and Hope: God On Mute by Pete Greig 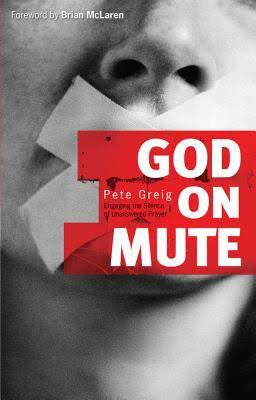 What do you do when God is silent? This book is dedicated to people who are hurting and secretly wondering “Where is God? Why’s this happening to me? And how come my prayers aren’t working?”

These are the emotions and questions of Holy Saturday: Jesus dead and buried, executed in the most painful and bloody way possible, after a travesty of a trial and public humiliation. How could his friends carry on when things had gone so staggeringly wrong with everything they’d dreamed of?Pete’s story is similar. I met the author when he came and spent a weekend with my church in Cambridge about the time that this book was written in 2007 and he shared some of what he had learned. He helped found the 24/7 Prayer movement in 1999, which has spread like wildfire around the world: there are now communities of Christians praying non-stop hour after hour, sometimes for a week or a weekend, other times for months on end, in every continent, including in York. As a student in Cambridge, I was one of those rising to take the 3am shift in the prayer room and it was one of the most inspiring and faith building things I did during that time of my life.

But despite seeing prayers powerfully answered around the world through his work, at the age of 29 Pete’s wife Samie was diagnosed with a brain tumour, unsure if it was even operable, then facing a lifetime of epilepsy with big scary seizures after it had been removed. God on Mute is what came out of six years living with fear and illness and wondering why, when God had answered so many other prayers, how come she was still so sick? This is a book filled with fearless honesty, questions and stories from people wrestling with those questions, from one man rescuing girls trapped in sex work in Thailand (why can he only save one or two at a time when thousands are suffering this?) to others facing illness, disability or loss.

Probably the most helpful feature of this book for me was the three chapters in the middle which deal with 15 reasons why prayer may not be answered, which at least gives a framework for understanding the problem and possibly finding a way forward. It has plenty of practical suggestions as well, to help deal with the times when God appears to be silent. These are structured under three headings:

The book finishes by thinking about what our prayers might tell us about hope:

See also: In Grief and Hope – A Journey in Books

2 thoughts on “In Grief and Hope: God On Mute by Pete Greig”